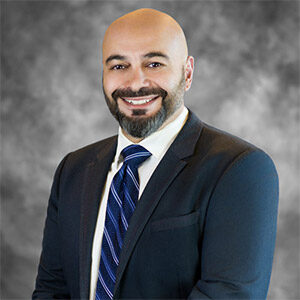 Dr. Cyrus Ramsey was born and raised in McLean, Virginia where he attended Langley High School. He graduated from The Catholic University of America in Washington, D.C. While there he played division-one rugby for three years. Dr. Ramsey received his BA in psychology from Catholic University and continued his studies at George Mason University majoring in chemistry. He founded the George Mason University Pre-Dental Society and served as President for two years. Dr. Ramsey received his DMD in 2003 from the University of Pennsylvania School of Dental Medicine.

He was a member of the OKU National Dental Honor Society and the Matthew Cryer Honor Society representing the highest academic honor at the University of Pennsylvania School of Dental Medicine. He received the American Dental Society of Anesthesia award for honors in pharmacology and anesthesia.

Dr. Ramsey received his MD from Case Western Reserve School of Medicine in 2006 and completed his residency training in Oral and Maxillofacial Surgery at University Hospital in Cleveland, Ohio. He did a surgical rotation at Karolinska Institute in Stockholm, Sweden with an emphasis on osseointegration, implantology, and pathology.

Dr. Ramsey is an avid sports enthusiast and previously served as the Oral and Maxillofacial Consultant for the National Hockey League (NHL) Washington Capitals and as a team physician for National Women’s Soccer League (NWSL) Washington Spirit. Dr. Ramsey is the Official Team Oral Surgeon for Major League Soccer (MLS) D.C. United and is also heavily involved with the youth academy. He’s developed his love for soccer through following his three sons as they have progressed through the sport. In addition to covering the professional team Dr. Ramsey is also heavily involved with D.C. United’s youth academy. When not in the office you can find him on a soccer field somewhere in the DMV.

There’s an investment of time to get a good successful implant… the end result is you can go have a steak and enjoy it!

When I come into the clinic, I received everything in one day. I am very happy now! I am happy for Dr. Ramsey putting my smile back!

I would like to thank Dr. Ramsey and the entire staff at Fairfax Oral and Maxillofacial Surgery for taking care of me and performing a successful surgery to take out my wisdom teeth. Even during a time of difficulty and concern with COVID-19, they took the precautionary measures that were necessary to keep me feeling healthy, safe, and comfortable. Thank you, Dr. Ramsey.